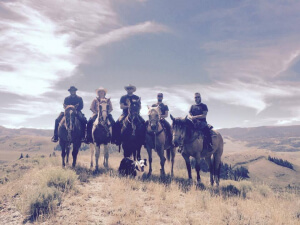 Just over a month ago we had a very special band come visit us at the ranch. The Whiskey Gentry boasts an excellent collection of covers and original songs which they serenaded our guests with while they were here. It started with Jason, guitarist and overall band savant (on occasion referred to as “head honcho” if you will), and his arrival at Goosewing Ranch nearly two months prior. Then, he did not come as a rising superstar, but as one of two sons celebrating their father’s birthday. 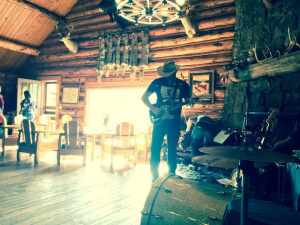 Jason with his guitar and cowboy hat

It was easy to befriend Jason and Tim, as well as their enigmatic father, Bob. Soon enough, we learned of the Atlanta-based band, whose music shines a modern and edgy light on the blend of bluegrass and traditional country, and Jason’s casual mention that they would be in the Jackson area in a mere handful of weeks. Bob and his sons departed the ranch a few days later (not without style: never did I imagine my job would include banging on their cabin door at four thirty in the morning so they wouldn’t miss their shuttle to the airport), and three weeks passed before it occurred to me that The Whiskey Gentry should be passing through our area soon. 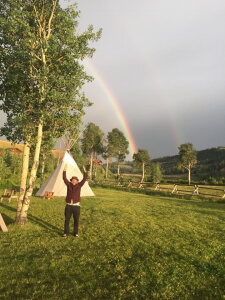 Price, quite happy about the double rainbow

A few emails later, and we shook electronic hands that they’d come stay with us for two nights and give our guests some good entertainment. The ranch quivered with excitement; most of the staff recalled Jason and Tim with fondness, and knew the company he kept couldn’t be that bad. We were greeted with grins, and quickly introduced to the five strangers spilling out of the van after Jason; Lauren and Rurik, Price, Sammy, and Jeremy. Their energy was infectious, snaking through the ranch as they took it all in; it carried through to their performance. 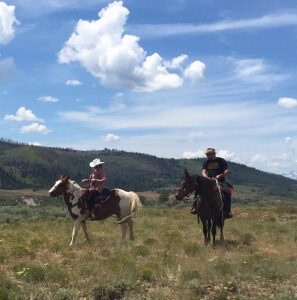 We took them on a trail ride; besides being good musicians, they were funny, kind, and easy to get along with. They took goofy pictures and one brought home a souvenir: a baby elk leg we found along the trail next to some wolf prints. Overall, these were some pretty cool dudes, and you should check them out.

This post was written by Sara Massery, who is experiencing her first season at Goosewing Ranch,as the Office Assistant. She hails from Pittsfield, Massachusetts, and has just completed her B.A. in English Writing and Literature at Emmanuel College. She was looking for an adventure, and she found one.